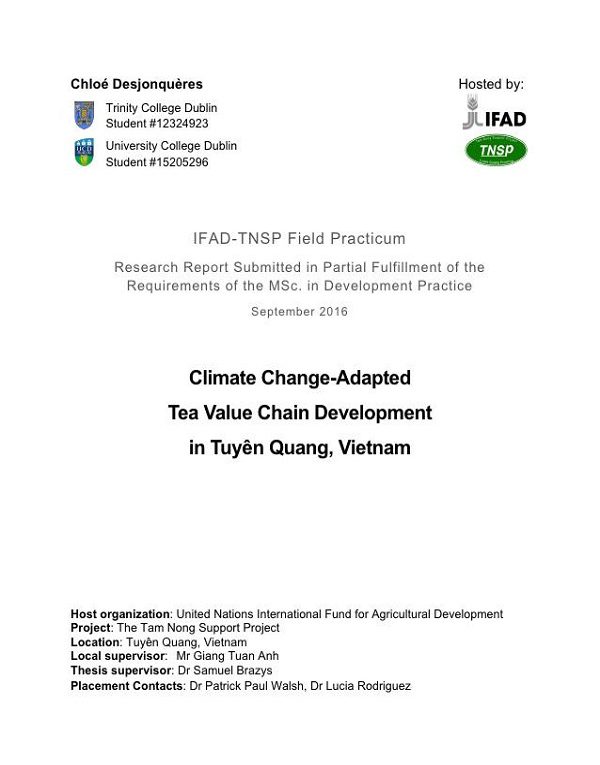 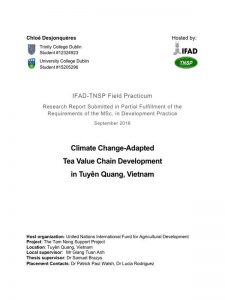 This is the research report of a study that aimed at analyzing the value chain of tea
in the province of Tuyên Quang, in the North East mountainous region of Vietnam, in a
context of current and future climate change. Tea is Tuyên Quang’s main perennial crop
and its 4th commodity, in an agricultural sector that employs over 80% of its labor force
(Tuyên Quang Statistical YearBook 2014, 2015). As such, significant efforts need to be
applied to maintain its place in the provincial economy. The global increase in demand
and associated increases in prices can significantly impact on rural incomes and food
security in the province. However, the crop is also vulnerable to changes in climate that
already significantly affect every stage of the value chain in the province. This report
shows that farmers are key in the development of climate-­adapted value chains, yet
efforts need to be made to increase their capacity to adapt in the short and longer term,
as they have the greatest potential to make the chain more resilient by adapting their
farming practices in line with market demand and certification standards, which will
spillover to other actors along the chain and increase their adaptive capacity to a changing
climate. This can be achieved through the introduction of new, climate-­specific initiatives,
such as the development of new varieties of tea that are heat resistant, the introduction
of high trees for shade and micro-­drip irrigation schemes to counter droughts, and
education on pest identification.