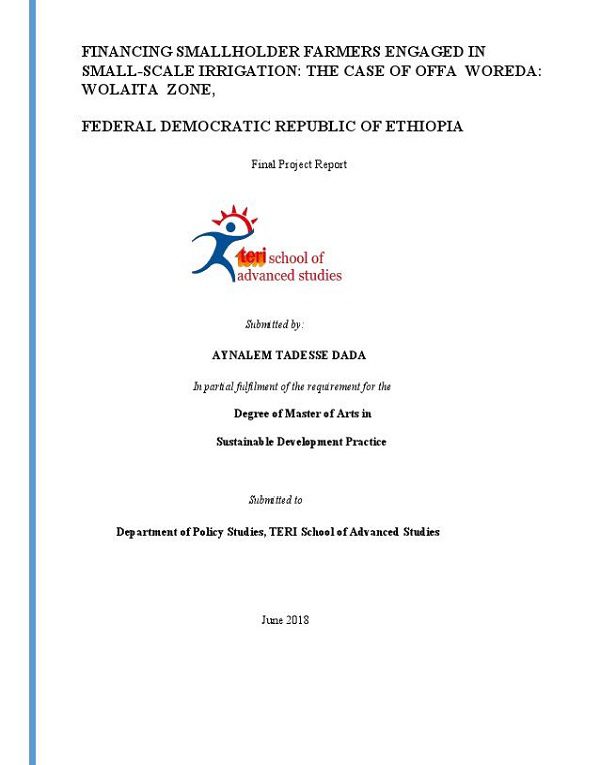 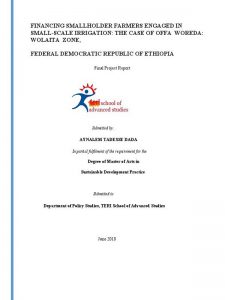 Agriculture, mainly the smallholder farming is the most dominant subsector in the
Ethiopian economy. Its contribution to employment creation, total factor input, total
output, and export earning is irreplaceably high in the present scenario. Yet,
Ethiopian agricultural sector, as in many other developing countries, is characterized
by a heavy dependence on natural rain. Its rainfall pattern is erratic and is
increasingly unpredictable over time. Although the current government is committed
to capitalize on agricultural development – mainly the smallholder chunk of the sector
by allocating a significant amount of the national budget (15-20%) for agriculture,
and as a result experiences a promising overall economic growth over years, it could
not bring structural change on its economy. Rural infrastructures, availability farmerfriendly
credit facility, crop insurance, etc. are lacking/very limited in many parts of
the country. This study is conducted in Woshwocha Dekaya rural community in the
SNNPR, Ethiopia to identify major challenges of smallholders engaged in small-scale
irrigation, issues of sustainability, mapping the financial institutions and their
financing mechanisms and investigate the potential roles of small-scale irrigation in
impacting the livelihoods and food security of the farming families and the larger
consumer community.